Tequila Mezcal, one of the greatest contributions of Mexico to world Tequila Mezcal  is one of 50 gourmet products originating in Mexico for universal use.  Among the products are vanilla, corn, tomatoes, chocolate, avocado, chile, beans, etc.
The agave, raw material to produce Tequila, was used in prehistoric times (10 thousand years before Christ) to make fibers of sartorial and domestic use, from  needles, pins, arrowheads, balms to apparel.  In Mexican territory there are 120 of the 300 varieties of agave in the world, but only a tenth of these species produce useful juices for human consumption. Eight of these agaves endemic species are used to produce alcoholic drinks.

A recent archaeological research in the population of Nativitas, Tlaxcala, near the city of Cacaxtla Olmec Xicalanca and at the wixarika  region of Jalisco and Nayarit, revealed the presence of utility distillate allegedly intended for tequila mezcal. Archaeologists María del Carmen Serra Puche, Carlos Lazcano Arce and Jesús Manuel de la Torre, researchers at the well renown  National Autonomous University of Mexico (UNAM), discovered in 2004 an oven for baking agaves. 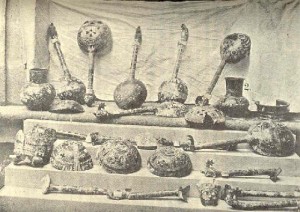 The ovens to cook agave remains, pottery and reed pipes for quiote (dry heart of the agave), presumably was used in the distillation of the juice Vaporized.  Specialists located in 400 BCE approximate age of the prehispanic still, although other sources presumed to consume mezcal in Mexico since 1500 BC

Hispanic culture of Mexico tequila mezcal would enrich the tequila process until the seventeenth century (1650) with the arrival and installation of stills Spanish brought from the Moors. In central and west is meant for distributing European distillate Discalced Carmelite missionaries who were instrumental in tracing the route of Tequila in Jalisco, in the eighteenth and nineteenth centuries.

In ancient times tequila –  mezcal was associated with religious rites linked to the Moon (Mexico) and the goddess Mayahuel – Xochitécatl. Its name in Nahuatl means “roasted agave” or “agave (METL) cooked in oven (ixcalli).

That wide variety of specific samples are only in denominations of its own: Tequila (Jalisco), sotol (Chihuahua), Bacanora (Sonora), Raicilla (San Luis Potosi), comiteco (Comitan, Chiapas) and mezcal (Oaxaca). With this latest denomination of origin, recognized by the Mexican government in 1997, currently produces 32 industrial enterprises with rights of commercial exploitation for more than 50 registered trademarks in several Mexican states.

Tequila companies are supervised by the CRT (Concejo Regulador del Tequila)  since 1973.  The National Council for Culture and the Arts (Conaculta) promotes activities for the protection and promotion of agave and its derivatives through actions that have resulted in the inclusion in 2006 Agave Landscape Natural and Cultural Heritage by UNESCO, or the organization of fairs such as the Cultural Festival to be held in Agave Tequila, Jalisco (source CONACULTA – Press Room.)

Anthropologists found traces of 400 a. C., the ancestral distillation still practiced – The trail led up to the year 400 BC. They found pots, pans, ovens, that is, a form of social organization, and then the real story: the distillation of mezcal not the Spanish introduced to our shores, as has been led to believe from the Colonial times, but is a process performed much earlier.

Evidence: the ovens found containing traces of agave fibers. And what seems incredible now there are still indigenous groups that carry out the production of mezcal as their ancestors. In fact, these are located in upland areas of the country, as in pre-Hispanic times. 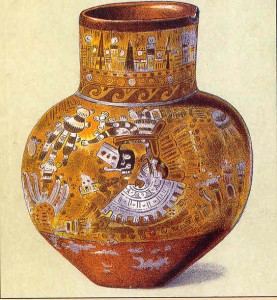 An investigation by anthropologists from the National Autonomous University of Mexico (UNAM), Mari Carmen Serra Puche, Carlos Lazcano Arce and Jesús Manuel de la Torre, under the direction of the first, is demonstrating this knowledge which, if confirmed, would establish distillation of tequila – mezcal that does not date from 1650, as indicated by the first reports, but 400 years before Christ. It would bring down a belief that has endured for nearly four centuries.

Surviving all sorts of attempts to silence them, since the colonizers production of tequila – mezcal was banned, this ancient form of making the drink is part of the cultural heritage that tends to disappear. Today we have our “own settlers” he also proposed to rescue this activity, which has endured some 25 centuries.

The route of tequila – mezcal – At first, imagined that their excavations in the residential area of Nativitas, Tlaxcala and Amatitan Jalisco, would lead to other routes. Found foundations of houses, mud flats, but there was more to be explained: the presence of ovens outside the home. “We put in doubt serve these furnaces for ceramics, as pointed out by previous reports, and established the idea that there could have been cooked agave pineapples to produce, in principle, what is now known as tepache” Lazcano Arce account.

Later, he says, found a lot of pots and hypothesized that had been used for the distillation of tequila – mezcal. Thus began, in 1998, tequila – mezcal Route Project. The tour has been intense, says the anthropologist. To date we have visited over 35 indigenous communities ”to look for producers who have a rustic activity in the production of mezcal, which allows us to see what tools used, what is their organization, which would help us to establish if the distillation has a pre-Hispanic origin”.

The findings are surprising: “The archaeological kilns are located in Tlaxcala and Jalisco, by ethnographic analogy, similar to the existing furnaces used in the cooking of agave for the production of tequila – mezcal.” But their findings go beyond the tools located. The foundations of housing units Nativitas can observe that the houses are associated with the furnaces. The analogy is that Indigenous groups now produced tequila – mezcal in a rustic home are also associated with production, and “their communities are in high places, which is the same as we found pre-Hispanic site Nativitas” .

“Bridge to the other world? – Lazcano Arce points on a fundamental aspect: the specialized production of the drink and other items located in this area, as the accounts of jadeite, can be established that the Hispanic community had an organization for such products. In other words, there was already division into social classes.

In principle, states that one of their hypotheses is that tequila – mezcal was a product of distinction in these societies, “not everyone could access it. In other words, has to do with certain hierarchies and rituals that were made in the ceremonial area Xochitécatl (part of the same set where is Nativitas, the residential area, and Cacaxtla, the administrative center). ”

Indigenous communities today, he says, also use the tequila mezcal to perform rituals that we assume have been since pre-Hispanic times. ” For example, produce the drink during the dry season and the spread in their villages to make the request for rain. The wixarikas, natives of Jalisco and Nayarit, use it as “a process of initiation for boys and girls from three years, which means passing a level, you have to do with age and role within society, other stage of adult life, “.

In the pre-Hispanic world there is another possible use of tequila mezcal: altered states of consciousness of the rulers to come into contact with other worlds. Manuel de la Torre, one of the researchers involved in the project, recalls that in the Maya area is documented “the use of substances that alter states of consciousness, used by religious and political elites to enter into communication with other levels of reality.

“There are vessels in the Maya area showing practices enemas, which is inserted rectally a hallucinogen and it allows leaders to contact their ancestors. This is shown in the wakes with wonderful figures, such as snakes copal smoke form.
“In general, altered states of consciousness allow officers to contact the other world to return later to this and tell his constituents what they said their ancestors. Tequila mezcal, then, could have served as a bridge to the world supernatural, which would also explain that not everyone can consume that product, “he reflects.

The evidence – the results are positive: the analysis of residues on Nativitas Prehispanic kilns, developed by specialists and Alba Raymundo Barrios Zea at the Institute of Chemistry, UNAM, confirm the presence of Agave and fuel that used for the cooking of the pineapple.

Lazcano Arce and De la Torre indicated that it remains to confirm that the pots located in the area were used for distilling. To demonstrate, these vessels are currently examined by the experts mentioned above who issued the results in about five months. If the study is positive, tequila mezcal Route establish, without doubt, that distillation of the drink “is given at least 400 years before Christ, as we have been dating the contexts of both houses as Nativitas furnaces, down the old “point.

The idea of distillation is inherited from the colonizers, who in turn received it from the Arabs, would fall under its own weight. “Rather, what they actually do the Spanish to establish a change in the working tool. It would not be pots, or mud, as do the wixarika  (Huichol), but metal as a tool for production. Is, it is a substitute and accelerator as the speed of distillation, “says Lazcano Arce.

Anthropologists say they have managed to benefit the National Council of Science and Technology (CONACYT) and the Support Program for Research and Innovation Projects (PAPIIT) of the UNAM. The project involves, in addition to the experts quoted, the director of the School of Chemistry, Santiago Capella, and students of the National School of Anthropology and History (ENAH) Nadia Romero and Erick Mejia